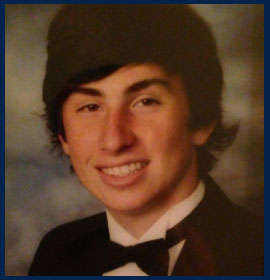 Nolan Michael Burch was born on November 7, 1996, and grew up in Williamsville, NY.  He was a very good student and was involved in many sports, his favorites being hockey and baseball. He attended Canisius High School, which introduced him to students from all over the Buffalo area, and was known for his keen ability to bring his friends from middle and high school into one large circle of lifelong friends.   In August of 2014, Nolan began his freshman year of college at West Virginia University. He was taking a full course load while working a part-time job, but wanted to get more involved on campus. He debated between joining club hockey or rushing a fraternity, but not wanting to over-extend himself, he chose to do the fraternity. After three months of pledging, November 12th, 2014 marked the night when the brothers would finally be initiated, following one last night of hazing. On this night, upon being instructed to drink a full bottle of whiskey, Nolan tragically overdosed on alcohol.  Unfortunately, nobody realized Nolan’s dire condition until it was too late. CPR was administered for a long time which allowed Nolan to make it to the hospital and to be placed on life support. Almost 300 people were able to see Nolan one last time as they went into his room two at a time to be by his side. Nolan’s lifelong friends from Buffalo, his new friends from college and most importantly his family all had time to say good-bye. Nolan was taken off life support on November 14, 2014 and passed away at 11:43am due to acute ethanol intoxication. His Blood-Alcohol Level was 0.493.  Nolan was able to save four lives in his death through the miracle of organ donation. His lungs, kidneys and liver all allowed another to live on.

“BREATHE, NOLAN, BREATHE” IS A RAW, REAL, AND EMOTIONALLY-CHARGED DOCUMENTARY THAT FOLLOWS THE EVENTS THAT UNFOLDED WHEN NOLAN BURCH (18) OVERDOSED ON ALCOHOL ON THE NIGHT OF NOV. 12, 2014. THE FILM DETAILS THE LACK OF URGENCY AND CARE SHOWN FOR BURCH BY THE OTHER FRATERNITY MEMBERS, AND WHAT HAPPENED NEXT FOR NOLAN, HIS FAMILY AND THE UNIVERSITY. THE FILM’S MISSION IS TO OPEN UP AN HONEST DIALOGUE AND EDUCATE YOUNG ADULTS TO ENSURE PREVENTABLE SITUATIONS LIKE THIS NEVER HAPPEN AGAIN.”